Remembering Dave on his 1st Anniversary

We can't believe that it has been a year since we said farewell to Dave. To mark his anniversary we asked those who knew him through his work in the community with Cars Area Together and Safe and Sound to share a memory they have of Dave. There are some great moments shared in the video below. 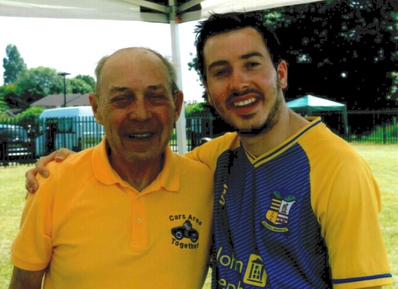 Many people knew Dave as a family man, neighbour, friend and a colleague. Many also knew him as a proud Welshman (born on St David’s day no less),  rugby fan and supporter of Swansea City FC. The other reason he was so well known was because of all the different projects and partnerships he was involved with, always doing his bit to help make Smith’s Wood a better place to live. But what most people may not know is just how much time Dave gave to his community and just how many good causes he became involved with over very many years.

Dave was born in 1947 in Swansea, South Wales and spent most of his working life as a mechanical engineer for a machine tool manufacturer in Birmingham. Throughout Dave’s working life he was active in the unions and from the age of 25 (!) was the Chair of the works union committee.

In 1972, whilst an engineer, Dave moved with his family to the Cars Estate in Smith’s Wood.

In 1999 Dave became one of the original tenant representatives on the shadow board for Solihull Community Housing which, in April 2004, went on to become an Arm's Length Management Organisation (ALMO) to run the housing service on behalf of Solihull Council.  Dave continued to serve on the Board as vice-chair (and Chair of the Housing Sub-Committee) until 2016 when he finally stood down from the post due to his increasingly poor health.

In 2002 Dave was elected as the first chair of Safe & Sound in Area 13, the police liaison committee for the Cars Estate. Thanks, in no small part, to Dave’s sound leadership the Safe & Sound group  is still meeting 15 years later providing an invaluable link between the local community and not just the police but other key local services such as local councillors, health trusts and the local authority. Through his role with Safe & Sound Dave was invited to join the local Police Independent Advisory Group in 2012 where he served until it was disbanded in 2016.

After retiring in 2012 Dave helped set up, and became chair of, Around Again a charity that took over an empty shop in Smith’s Wood to sell on second hand household items at affordable prices to low income local households. The money raised by Around Again not only allowed the shop to remain open until it was demolished three years later but any surpluses the shop generated were used to pay for summer coach trips to the seaside for local families that otherwise could not have afforded a summer holiday.

I should also mention that throughout this period of time Dave was also a volunteer minibus driver for both a local secondary school and for Solihull Extended Services helping children from troubled families get to school every day.

In 2013 the Cars Estate was chosen to be one of 150 neighbourhoods  in England to receive £1m over a ten year period as part of the Big Lottery’s “Big Local” programme.  The aim of the programme is to give residents a real opportunity to help make their neighbourhood’s a better place to live. However, to access the funding the community first had to set up a resident led partnership. Dave was the first person to come forward from the Cars community to pledge his support, he played an absolutely vital part in bringing more residents on-board and to bring the first partnership together. It was no surprise that Dave was voted in as the partnership’s first chair, a position he served with his usual warmth and humour until the end even though his health meant he had had to step down for all his other responsibilities.

Sometimes when you come across someone like Dave, a person who is at the centre of everything in their neighbourhood, it is often sadly because they like the power it gives them or because it allows them to pursue their own very selfish agenda. Dave was just the opposite.  The reason he has been asked so many times to chair local groups was because he was so welcoming to new people and so open to new ideas.

For these reasons, and for over 20 years of commitment to make the neighbourhood he called home a better place to live, I believe Dave deserves to be remembered as one of the first heroes of the Cars community.


Written By Conrad Parke, Big Local rep.
With help from the Cars Area Together Partnership and friends.